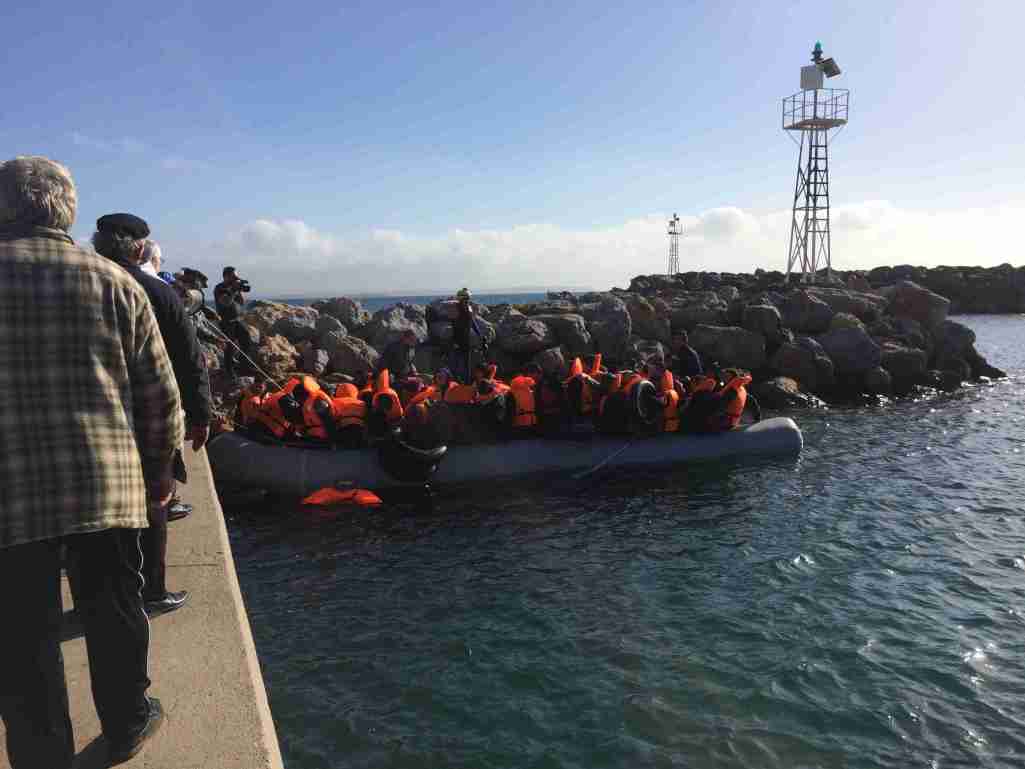 Unlike on the Balkan route, no governmental or non-governmental organizations are active on Chios, with the exception of the United Nations refugee welfare. For this reason, it is easier to get involved there for volunteers. You can go just about anywhere and be active. This but also about local and international volunteers runs – they receive the people on the sea and on the beaches, provide them with a (dry) clothing, give out food in the camps and clean the beaches. And so much more…

This will change, however, the Greek authorities to consider a voluntary registration process. This should be less expensive than in the Balkans. Currently it comes the Greek authorities rather to know who is on their islands. Allegedly, there were also to Lesvos have been trouble with so-called volunteers, stole from the refugees.

To mention particularly among the volunteers, the inhabitants of the island, are that – despite their own do not necessarily great location and whether the fact that she was faced with the difficult situation for years are still tirelessly with greatest commitment (and even greater heart) that support incoming people – and help where they can. And that's without animosity, without complaining. These people definitely deserve our full admiration.

The night before my arrival came about 1000 people on Chios on. In the morning hours around again so many so that the great people of the coast rescue team from a 16 hours (+) layer the supply of incoming people came and then the post-production on had… So was (of course) first on the new instruction not to think.

I first met with the phenomenal Sascha of the Dresden-Balkans-convoy. He has developed a drying chamber, where the wet shoes of arriving people can dry in about 2-3 hours (during registration). So the refugees can take almost immediately dry the shoes, if they move in the other camps.

If one imagines that all people get totally soaked from the boats and the drying of especially the shoes in the current weather conditions (in Greece) is extremely difficult, then one can think is that a huge relief of the "shoe"problem represents this drying chamber… If it were up to me, he would like to build more of them

Because I could be naturally here not much help, found the idea but absolutely worth supporting, I decided so that this would be a good way to invest a portion of our donations and have added 250 euro.

Posted by Dresden-Balkans-convoy on Thursday, 14. January 2016

How does the support

The coast rescue team (consisting of various local and international voluntary organisations and non-organised volunteers) monitor the coast in several sections and look out for incoming boats. There are volunteers in teams on the road, with car, laden with dry clothing, rescue blankets

(Often completely wet) clothes of the newcomers arrived on land, be replaced and they are supervised until a bus picks up they us in the registration camp brings. This is not always easy and complication-free. The local bus operators are instructed to make these trips in addition to their normal routes, which means of course extra work for the driver (and mostly just at night, when the boats arrive) and it also means that the buses are subject to a charge (3 euros). This leads (of course) ever to discussions, in particular, if someone has no money. Thank God, these problems are resolved but usually also very quickly – thanks to the commitment and the sensitivity of the rescue team and thanks to the fact that this sometimes used donations can be. It is also clear that the driver must also survive.

Then, the buses take people in an old tobacco warehouse in the town of Chios, after Tabakika. Here people are registered and get a kind of "access pass" to Europe. Thus you can take the ferry to Athens (for a fee). In Tabakika, there are also medical care, from 08:00 h to 17.00 h.

After the registration, distributed people on mainly two camps, where they will sleep well: Souda and the port camp. There is yet a third camp (in a former theater?), whose real name I unfortunately forgot that but "Popularly" only as "forgotten camp" referred to.

Medical care takes place in Tabakika – as I said during the day – by doctors, before and after apply this voluntary (and organizations, for example) WAHA), but then virtually without equipment (but with double engagement). In case of emergency, the ambulance is called (so he can be recognized because).

Is carried out primarily by the peoples' soup for the arriving people cook the food supply of the people kitchen Ifty and Olli with lots of other great people with great passion and tireless commitment. The kitchen is hired by private money and private donations, the ongoing costs are covered as well. An incredible performance. Twice a day there is soup for everyone, always different, prepared with much love and very very tasty

Because but soup twice a day for an average 750 people per day (approx. 0,50 euro per meal) means that very many vegetables have to be cut and there is always something to do, I decided then first a little to support loved ones. Initially I thought we go first (thanks to the great dispenser) and then we see what happens. Relatively quickly, I was then so entranced by these people – I had no idea how much devotion you can clean potatoes, onions and other vegetables and cut… 😉 – I decided to introduce a part of my Labour here. Statistically, I have now I think my set of vegetables cut per human life meets 😉

Also a cooperation of the peoples' kitchen with the German Alliance for civilian assistance, the distribution of meals was significantly facilitated by their mobile kitchen is evolved at the same time. In addition to the two angels of Maekruna w Majnune (now (?) in addition to the D-B-K part) supply the people their very great field kitchen with hot tea, snacks and above all care and a smile.

There is also a local organization that provides people with sandwiches, but this was so far only very irregular and unreliable.

As though the situation on Chios (as well as on the other islands of the Mediterranean) not already difficult enough, the presence of Frontex and the pressure were significantly more or less with my arrival on the Greek authorities. In the "mission border security" is apparently a free hand for the border agency, one has decided probably, that is an integral part of the work to make life difficult for the volunteers. Through increased inspections of personal data to complete searches of incoming people, and their supporters, is obviously consistently tried to make mature volunteers.  The arrest of the Spanish Rescue Diver on Lesbos is part of this strategy. Unsuccessfully of course! Also Turkey is be realized obviously – also in the same week – she gets money from Europe to 'secure 'our borders' ", so that the camp in Cesme was closed and all people were transported back to Izmir. This resulted in of course, that the people had a still beschwerlicheren (and more expensive) way behind when they (often totally famished after several days of hide-and-seek with the Turkish authorities) finally arrived on Chios. (But also in these cases are the volunteers here flexible and just give the soup of the next day in the middle of the night and then just work through, again to provide lunch.) Some incoming reported also by shots on the boats on the part of the Turkish military – I just hope that they have not really targeted…