Before we finish yet a final report in the coming days, we want to give an overview of the conditions here for the experiences of tonight.

Many people have to sleep with their tents on the field, therefore always the danger that their accommodation go down in rain. Since it rained that night, we wanted to check it out. The camera crews and the most photographer * inside usually don't see this condition because they only come around noon at the camp. Until then, night rain and mud are gone again.

Our fears have unfortunately been confirmed. The half site is under water, many tents are completely wet. Especially for the children, this is particularly difficult, because they are more prone to disease. In nearly every tent, children are sometimes up to four.
We meet Muhammad, who complains with other fathers about the situation. Like many others he has several children in his tent. He said that they all were sick and coughing. For a month, he is with his family from Syria on the road and five days in Idomeni. He finds the situation unbearable, so want to move as possible and that is reported on the grievances.

As well as Mohammed's thousands of people here. When walking through the camp, we hear a veritable concert of cough, many people are sick. After the rain, puddles everywhere and because there is no functioning garbage for so many people, waste lying around everywhere. 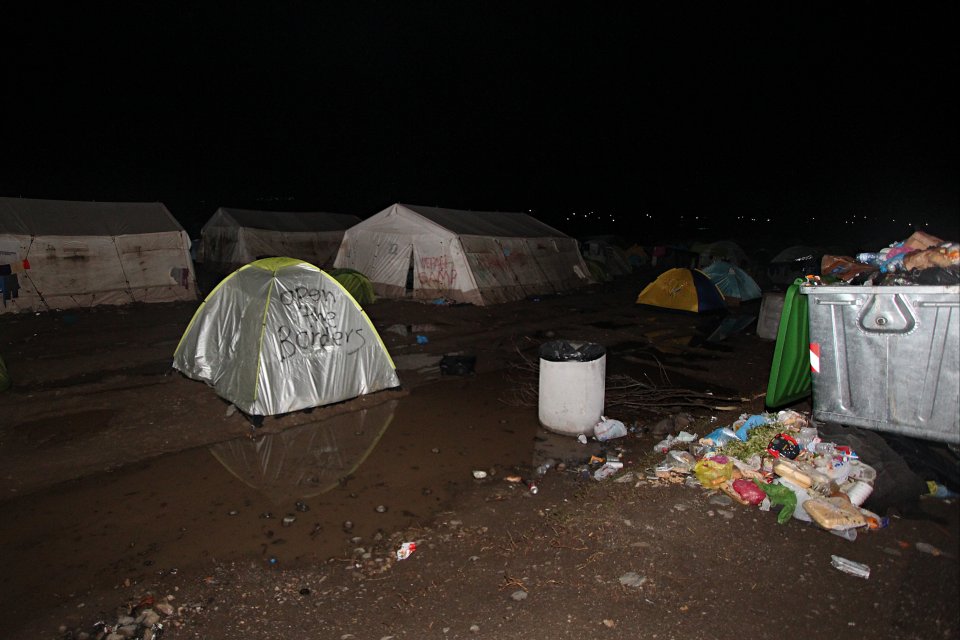 During the day, private people come every now and again and bring donations with their cars. You are literally overrun. The underserved people ripping everything out of the hands of them and fight for food, clothes, even to toilet paper.

Please don't what can happen that people in #Idomeni no longer have to fight to food/clothing/toilet paper? PIC.Twitter.com/1W3p4TG1Fp

Volunteers replace State tasks
There's a hot meal by the Greek State, nor by one of the great charities. Doctors without borders deal only baguette. The only ones that offered a warm meal and tea free of charge, are the independent volunteers, the vast majority with a left, anarchist background. The human aid delievery mission boils in a specially rented house in a neighboring village, day rode day catering for 8000(!) People! We have cooked together with the people and distributed food.

Ill-treatment by Macedonian police?
This night a refugee was hospitalized in emergency tents, which should be been mistreated by Macedonian police. His friends reported that he had been regularly after his call from the Greek Macedonian border plants. The Macedonian security forces allegedly beat him up and mauled him with a stun gun during the subsequent control in a container. A journalist who writes for the Berlin Morgenpost, stated that the treating doctors confirmed: the man was beaten. His friends suspected the attack might be related that he had been involved in the protests against for the opening of the border on Monday.

Military camp rather than self-determination
Newly opened military camps in the area could be the alternative for the Greek Government to this quasi wild camp. These same but rather prisons. Neither journalist * inside, yet independent volunteers have access to the site. Also, the food should be there defective and are not big different from the current situation.